One of the realities of constructing and repairing commercial buildings is forever remaining aware of the dangers of moisture. Rotting wood, mold, chipped paint and more are all risks of water entering the building in areas where it’s not wanted. One good leak could cause tens of thousands of dollars of damage, and an area that is already susceptible could cause multiple rounds of damage if not dealt with effectively. So prevention is key to protecting buildings from the havoc moisture can wreak.

But a rotted roof and a massive storm aren’t the only ways moisture can enter a commercial building. It can also come from the ground up, causing damage building owners may not even think to look for until it’s too late. Damage That Can Be Caused By Crawl Space Moisture

Most people don’t think twice about the space beneath a building. They might store tools, parts, and random odds and ends down there, but other than when they have to retrieve those items, the crawl space is often a forgotten area.

Unfortunately, crawl spaces typically have dirt floors, which makes them prime culprits for moisture entering the commercial building.  That’s because moisture infiltration in the form of water vapor from the soil, if not contained, can slowly erode your building from the ground up. We’re talking structural damage, electrical shorts, pipe erosion, and the degradation of insulation and fiberglass. Not to mention the risk of heavy allergens (like mold spores and dust mite droppings) entering your living spaces.

Luckily, a crawl space vapor barrier offers a relatively simple solution to all of this.

What is a Crawl Space Vapor Barrier?

How do Vapor Barriers Work?

These barriers are typically thick plastic materials that are installed across the soil to prevent ground moisture from ever entering the space at all.

Now, it’s important to know these barriers only work to prevent ground moisture from migrating into your crawl space and building. Water runoff or leaking pipes could still result in moisture in the crawl space area, which is another reason to consider combining your barrier with a waterproofing system.

Is a Vapor Barrier Really Necessary For Your Crawl Space?

If you’re building in a drier climate, you might think you don’t have to worry much about crawl space vapor. After all, how much moisture could really be residing in the dirt beneath a building in Arizona, for instance?

The answer is a lot. In fact, an Advanced Energy study conducted in Flagstaff, Arizona found a 15 percent annual energy savings in homes and buildings where crawl spaces were sealed, indicating a drastic reduction in moisture, resulting in easier to control temps indoors.

No matter where you’re constructing, if a building has a crawl space, it can benefit from a crawl space barrier.

How Thick Does the Barrier Need to Be?

PERMINATOR underslab vapor barrier comes in 10 and 15 Mil thickness options. Deciding which thickness level is right for the building you’re working on often comes down to how much protection is needed.

And, for additional puncture resistance, PERMINATOR HP is also available and is furnished in a 15-mil thickness.

It is imperative that the barrier possess a high puncture resistance as it is going to be exposed, rather than protected by a concrete floor slab, and can be susceptible to damage.  The defining standard for plastic vapor retarders in contact with the ground is ASTM E1745 and both PERMINATOR 10 and 15 mil far exceed the requirements of this standard.

PERMINATOR underslab vapor barrier is available throughout Canada and the U.S., as well as in various locations worldwide. You can find a local distributor through our manufacturer website.

Prior to installing a crawl space barrier, you’ll want to remove any items being stored down there so that you can have free access to the ground you’ll be covering. It’s also important to dry out the crawl space to the best of your ability before starting.

This can be accomplished by removing any visible moisture sources (such as puddles) removing wet insulation and debris, and potentially even calling in a professional to scrub surfaces clean of mold.

Once the crawlspace is clean and relatively dry, you’ll want to gather your tools for installation. These are the items you will find yourself thankful to have on hand:

Now that you’ve got the crawl space clean and dry, and you’ve gathered all your tools, it’s time to begin.

Installation of PERMINATOR underslab vapor barrier can be completed in a few simple steps:

As PERMINATOR is the industry-leading product for controlling vapor infiltration and also soil contaminants, such as radon, along with boasting a high puncture resistance, it is the perfect solution for crawl space moisture control. But you may want to consider combining it with additional water-proofing measures to maximize the reduction of moisture.

But what about water that may enter from runoff or leaking pipes?

Creating a waterproofing system in the crawl space area may best start with enclosing the area to prevent additional water entering from the outside. If the crawl space is completely enclosed, supplying air from the HVAC system can help to quickly evaporate any additional water that may enter the space. Installing a humidifier and exhausting air outside are also effective methods for keeping the crawlspace moisture free.

In the end, we all want to protect the commercial buildings we’re working on. And using PERMINATOR underslab vapor barrier to prevent ground moisture from entering a building through the crawl space is a great first step toward increased water damage protection. 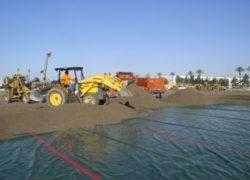 PERMINATOR TAPE is a self-adhesive tape, used in conjunction with the application of PERMINATOR underslab vapor barrier. It is for… TERMINATION BAR is a multi-purpose, preformed, professional way to attach a wide variety of construction waterproofing, drainage boards, and flashing… When the Weather Outside is Frightful

Building Envelope Building Materials Made for Low Temperatures If you’re specifying for winter-grade products, or you’re a contractor working outside… What IS Negative Side Waterproofing?

Negative-side waterproofing is the act of applying waterproofing materials to the negative, or dry side, a.k.a. the interior side of… When junior architects or contractors are starting out, they get bombarded with new terms and a whole new language, so…